“I’ve always had a passion for beauty, and when I started performing and working with a bunch of makeup artists, I realized how important it was to have a really good skincare routine. I’d pick their brains on their favorite products, their approach to makeup application, how they would recommend removing makeup… When I was younger, I was bullied for not wearing makeup. It wasn’t until I was 13 and started homeschool that I began to have fun with it. I would stare at my older sister and mom as they put on makeup—I found that hypnotic. It was like a pre-YouTube makeup tutorial. I probably took my own makeup too far sometimes—too much eyeshadow or eyeliner, or over-dyeing my eyebrows. But that was also around the time that I started taking art seriously.

It seems that there is an unspoken but generalized rule on the internet of how people should look. A lot of makeup bloggers tend to have very similar techniques and make everyone look exactly the same: the bronzer is the same, the multi-layer application for coverage… It’s about being completely clean, and not clean like clean beauty—just this sense of sterility. I prefer a more childlike way of looking at things. Everybody has different cheekbones and jawlines and eyebrows; the way that a cupid’s bow looks on one person is different from another. I just really believe in accentuating what’s already there, and not trying to put on a new kind of mask. That being said, no matter how many times someone says, ‘You’re pretty,’ or whatever, it still doesn’t mean much. [Laughs] But making beauty and fashion a part of my world feels natural. My music is heavier and rock-leaning, and beauty isn’t usually the focal point for people in that space. I’m not trying to run with the boys. I don’t need to subscribe to being so masculine, and I don’t have to impress anyone, just myself. 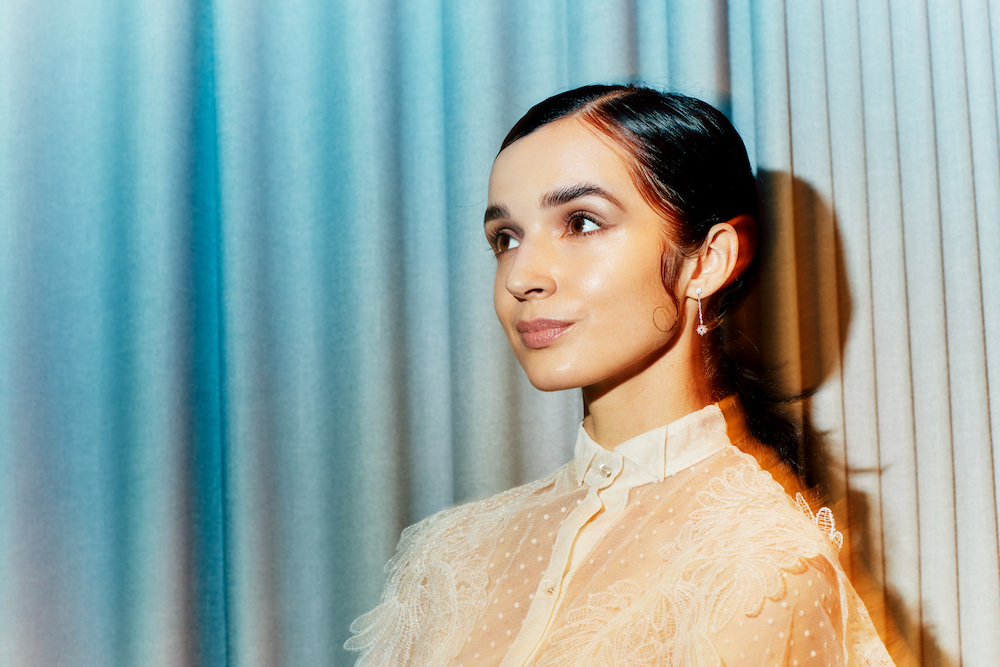 CAREER
The first two albums that I released served more as music pairings to the YouTube video art that I was uploading. Flux, my new album, is meant to stand on its own. What I wanted to get out of the process and what I wanted to push forth changed with this album. We started the recording process for it almost a year ago, and I’m very excited for people to hear it. The tour was postponed because I didn’t want it to be a risk for the audience, crew, band, or myself. In the meantime, I started doing makeup tutorials with my makeup artist Jess. We love makeup tutorials but agree that we want them to be concise. I just feel very fortunate to be able to do what I love every day, dress up and get my hair and makeup done, and live this life that I always wanted. Even with the uncertainty of the world and its current state, it’s still very exciting because each day is different.

TRAVEL
I have a little routine that I typically do when I’m on an airplane: I use a travel Revlon cuticle oil, which smells like pumpkin. I also put a lot of oil in my hair before I get on planes. Then I put on undereye patches from Skyn Iceland—the protective masks that we wear now make it easier, because most of the eye patch hides under the mask. Then I use some sort of lip mask, like the Bite Beauty Agave Intensive Mask. I was given a sample of it on a flight recently, and I was so excited because now I have two!

I’m not trying to run with the boys. I don’t need to subscribe to being so masculine, and I don’t have to impress anyone, just myself.

SKINCARE
When you’ve been unconscious on a pillow for eight hours, your skin will not be clean. Or at least that’s what I think. The cleanser I use most consistently is the Clear Cell Salicylic Gel Cleanser from Image—I like that it has salicylic acid in it, and I feel like it’s a good reset. But I try different cleansers all the time. I like the one from Drunk Elephant, and if I’ve done a shoot and I need to get rid of any excess makeup, I use the Enzyme Cleanser from Auteur. An aesthetician at Skin Worship recommended it to me. I leave that one on for two to five minutes like a mask, and it makes me look completely, visibly clean. My pores look smaller. If I’ve recently been on a flight, I’ll also do a face mask to make sure I’m hydrated. Farmacy’s Honey Potion Antioxidant Hydration Mask is good, and the Rosa Clay Mask from Skin by Jem mixed with rosewater makes my skin very soft and clean. But the mask that I love most is Rodial’s Pink Diamond Lifting Face Mask. I’ve been using it for a number of years now, and I always receive compliments on my skin after using it. It makes my skin more even-toned, especially if I leave it on for the full 20 minutes.

After that I tone, either with Glow Recipe’s BHA+PHA Toner or Glossier Solution. The Glow Recipe one is a bit more calming—when I do use Solution, it’s after I’ve performed. Then I’ll apply the Plum Plump Hyaluronic Acid Serum from Glow Recipe and my eye cream, True Botanicals Renew Resurrection Radiance. I really like that all the True Botanicals are vegan and smell really nice. I’m a fan of their Pure Radiance Oil, too, which I’ll sometimes use at the end of my process for extra glow on my cheekbones. And at night I like to use the True Botanicals Moisture Lock Overnight Mask on top of my moisturizer. My usual cream is from Youth To The People, which I like because it’s very simple. It gets the job done, there’s nothing too complex about it, it’s good under makeup… it’s neutral. And finally, Glossier Invisible Shield is my sunscreen. It’s important to wear sunscreen, especially when you live in LA, and I like this one because it doesn’t feel too oily. 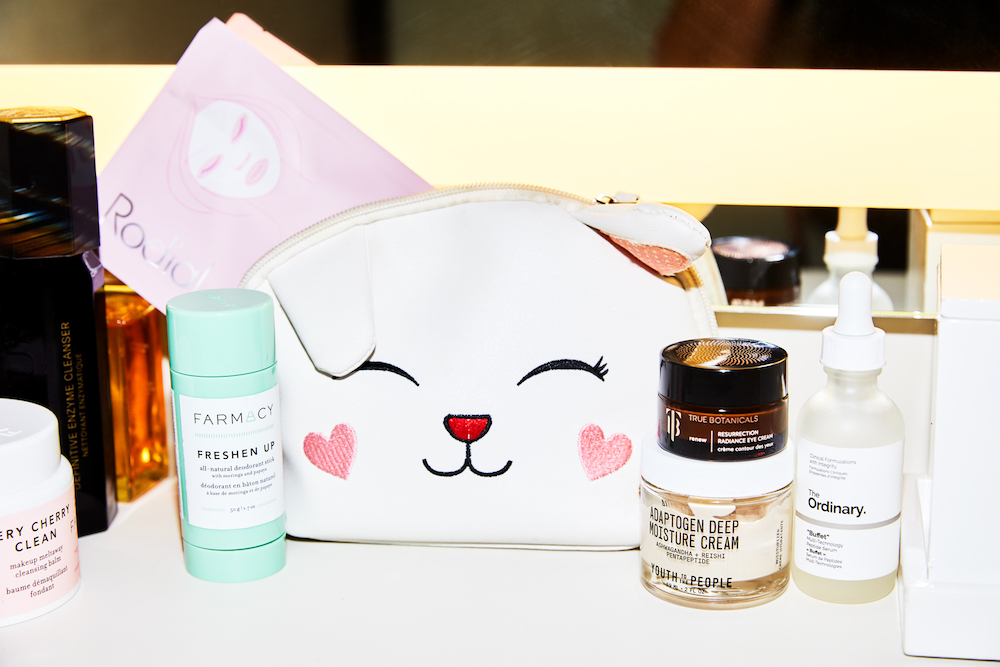 It’s worth noting that whenever I go to a new country, I try to get a new facial. I got the Biologique Recherche one in Paris—they have this whole process where they scan your skin and give you a breakdown of its hydration level. I got the Masque VIP O2 from that facial, which they say is supposed to block pollution. I got a remarkable facial in Prague. I’m not entirely sure what the process was, but they used some kind of electric device that made me taste metal, and when they moved it from left to right on my face, I felt my muscles and skin tightening. It was so cool!

MAKEUP
If I’m not on set or on camera, I typically do not wear foundation. I’ll use the Nars Radiant Creamy Concealer if I have any problem spots, and just blend it out so things look even. If I want to take things a step further, I use the Cocokind Highlighter Stick in Sunrei. I really like how minimal and clean their line feels. One of the best tips a makeup artist gave me was to decide on three things in your routine that matter the most to you, and make them a part of your consistent casual look. My three things are mascara, lip gloss, and eyebrows, for sure.

One of the best tips a makeup artist gave me was to decide on three things in your routine that matter the most to you, and make them a part of your consistent casual look.

I take my eyebrows seriously. Jess laminates them for me, because they’re naturally pretty full, and in my opinion it looks nice when they’re well-groomed and standing up. She also dyes them, which is a necessary process even if it only lasts two weeks. Jess is the queen of eyebrows—hers are really great, too, which I definitely noticed. I judge people’s brows, and even their skin, because if I like what they’re doing I want them to do it on me. I keep the Anastasia Brow Wiz and Brow Gel in my purse and I use them every day. If I’m going for a dramatic lash look I’ll use Too Faced mascara. I really like that the wand has a lot of bristles, which separates nicely, and it makes my lashes darker. Not clumpy—just more noticeable and thick. I’m also a fan of Glossier Lash Slick because it spaces out my lashes well. But it’s pretty natural looking. When I want the drama, I’ll reach for one with more bristles. I really enjoy lip and cheek products, and at the moment I have Bobbi Brown Lip Color in Sandwash Pink in my purse. It’s a really nice nude shade.

HAIR
I let my hair air dry, and then I’ll flip it upside down and spray it with this Aiir product to mess it up a little bit. I also like the R + Co. Rodeo Star Thickening Foam as an air dry product. My natural texture has a wave to it, and my baby hairs have a mind of their own. I’ll use hairspray or an eyebrow gel to brush them down, and one of those little brushes that almost looks like a toothbrush to style them. I don’t color my hair now, but I was blonde for a long time. I learned a lot of valuable lessons from that. The first time I went blonde, in 2009, it was because I had a bunch of friends in hair school that were doing it for free. They were still learning. Ultimately my hair became so dead and fried that I had to cut it all off into a pixie. Another thing that set me back was extensions—bead bond, keratin, tape. I didn’t know what to ask for, so it was trial and error. 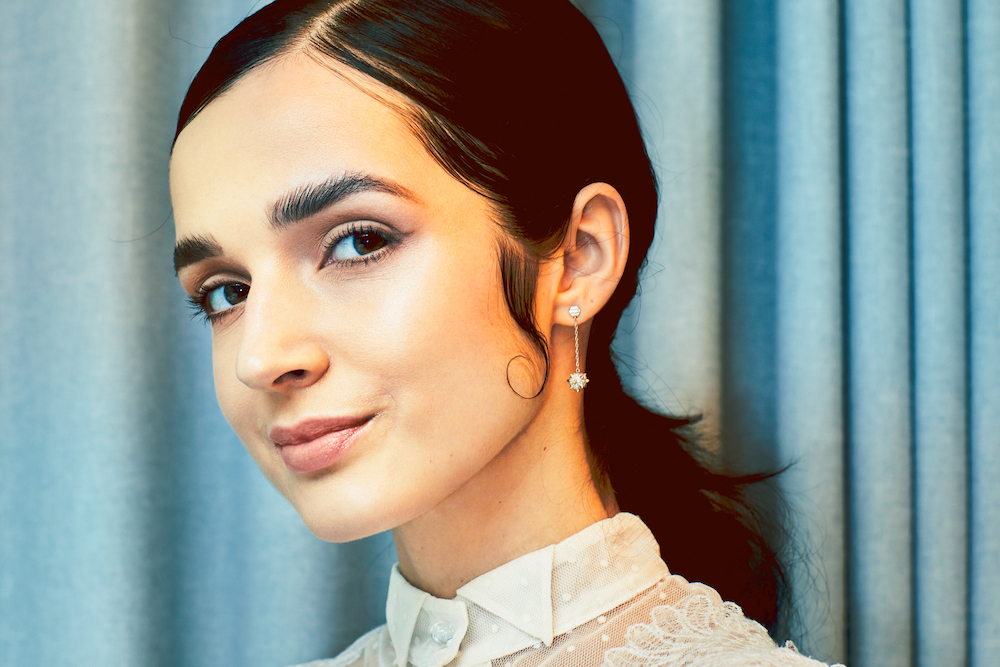 I really loved my long hair, so after that I made it my mission to understand how to keep my hair healthy. It’s actually important to start from the inside out—diet affects your hair growth, and collagen is a really important hair, skin, and nail vitamin. When I get my hair cut I ask them to do a deep conditioning treatment. At night, I’ll put oil on the ends because I notice that by morning, a lot of it gets absorbed. Gisou’s Honey Infused Hair Oil is my favorite. I love the smell, and it feels nice in my hands and on my hair.

BODY + NAILS
I really like to moisturize with the Kate McLeod Daily Body Stone. And I always have my nails done. Currently, they have black flowers with little dots in the center. As far as deodorants go, the Farmacy Freshen Up All-Natural Deodorant works. I like to use natural deodorants because I want to be able to sweat, I just don’t want to smell. Or, I want to smell more pleasant, and I feel the Farmacy deodorant accomplishes that for me. I was using Tom’s deodorant before, and truly just stumbled upon this one. It’s the only one that I have that smells like nothing.

I never buy the same perfume twice, so I never know the name of what I’m using. But my tastes are more consistently on the side of smells that lean more masculine than floral or fruity. Fruity scents remind me of a middle school locker room. I do like to wear Lush Fairy Dust Dusting Powder on my collarbones when I’m performing. It smells like bubblegum.”

—as told to ITG

Poppy photographed by Alexandra Genova on September 10, 2021 in New York.