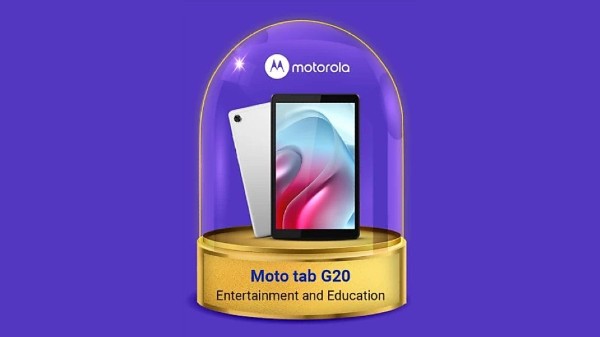 Of late, several reports claim that Motorola is working on a new tablet that could be launched sometime soon in India. Last month, it was suggested that the upcoming tab could be dubbed Moto Tab G20 as at the Google Play Console with this moniker. Now, it has been hinted that the alleged device could be launched in India on September 30.

From the Flipkart teaser, the Moto Tab G20 appears to flaunt thick bezels and a single camera sensor at its rear. As per the teaser image, it looks like this tab could be ideal for education and entertainment requirements. Also, it is tipped that the upcoming Motorola tablet could be a mid-ranger and might compete against the Samsung Galaxy Tab A7 Lite.

As per the tipster Yogesh Brar, the Moto Tab G20 could be launched with an 8-inch IPS display with a HD resolution of 720p. Under its hood, the tablet is likely to arrive with hardware aspects including a MediaTek Helio P22T chipset alongside 3GB RAM and 32GB storage space. Like the smartphones launches by the Lenovo-owned company, the Motorola tablet is believed to run the stock version of Android 11 OS.

For imaging, there could be a 2MP sensor at the front to handle the selfies and video calling requirements. Also, the rear of the Moto Tab G20 is likely to arrive with a 5MP camera sensor. Other aspects of the upcoming tablet that might be churned out of Motorola’s stable are likely to include connectivity features such as Wi-Fi, Bluetooth 5, a 3.5mm audio jack, and a USB Type-C port, front-facing speakers, and a 5100mAh battery with support for regular 10W charging.

Notably, the Moto Tab G20 appears to be the rebranded variant of the Lenovo Tab M8 (3rd Gen) model. For now, there is no word regarding the pricing of the soon-to-be-launched Motorola tablet.

Redmi K50 series is set to feature the most powerful X-axis vibration motor on Android smartphones, according to Xiaomi. The[...]

The cell phones of nearly three dozen journalists and activists in El Salvador, several of whom were investigating alleged state[...]

2021 has been a great year for smartphones, all things considered. We put out a list in the middle of[...]