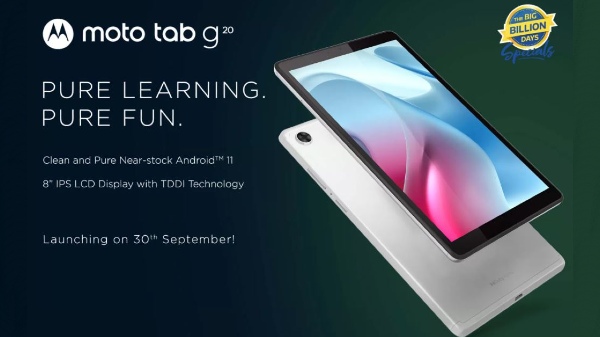 The Moto Tab G20 will come with an 8-inch display offering HD+ resolution and TDDI technology. According to the official renders, the device will have a part-metal, part-plastic unibody design with a USB Type-C port for charging along with a 3.5mm headphone jack.

As per the RAM and storage, the device will offer 3GB RAM and 32GB storage, possibly with a microSD card slot for additional storage expansion. In terms of software, like every other modern Motorola smartphone, the Moto Tab G20 will run on stock Android UI. Looking at the teasers, this variant might miss out on the fingerprint sensor, but it should offer selfie-camera-assisted face unlock.

It also comes with dedicated Google Kids Space, which offers pre-loaded content along with built-in parental control features. A 5,100 mAh battery powers the Moto Tab G20, which is said to deliver 15 hours of video playback or 18 hours of web browsing on a single charge.

Your first looking at the upcoming #MotoTabG20 What will be the price?https://t.co/BFkSSlELRf

Motorola India has officially confirmed that the Moto Tab G20 will be unveiled on September 30. Considering the Flipkart Big Billion Days sale is just around the corner, the device is likely to be made available around the same time frame.

As of now, there is no information on the pricing. However, considering the pricing, the Moto Tab G20 is likely to cost less than the recently launched Realme Pad. Hence, it is expected to be priced around Rs. 12,000, at least for the base variant.

iQoo 9 and iQoo 9 Pro smartphones recently made their debut in China. The handsets are now making their way[...]

Vivo T1’s India launch timeline as well as the storage variants have been tipped. The smartphone will launch in India[...]