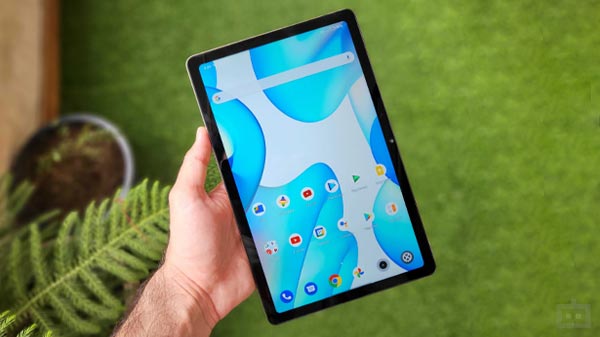 The Realme Pad is one of the nicest-looking big-screen tablets you can buy in India. For its price, the tablet offers a premium metal build and the required durability. At 6.9mm, the tablet is extremely slim and weighs only 440 grams. It isn’t bulky and looks very upmarket; however, you have to handle it with utmost care since the big screen and sleek body demand a proper two-hand grip, especially if kids are fiddling with it.

The bezels surrounding the screen are relatively thicker but help to avoid unwanted screen touches. You can buy the Realme Tab in two color variants- Grey and Gold. We are testing the latter and the metallic finish with minimal branding gives the tablet a very upmarket feel.

Realme has ensured a good set of ports and connectivity for its first tablet. The Realme Pad comes with a Type-C charging port at the bottom, two speaker units, and an oddly placed 3.5mm audio jack on the left corner. The right side of the tablet has the SIM card tray (nano-SIM + microSD card), two microphones, and a big volume rocker.

The power button rests at the top (if you are holding the tab in the portrait orientation) along with two speakers units, making it a quad-speaker setup. There’s no physical fingerprint scanner on the tablet, a slight bummer.

The thoughtful placement of the ports and buttons ensures functional usability of the tablet in both portrait and landscape orientation. Overall, Realme has done a good job in designing its first tablet for the Indian market. The Realme Pad is a well-designed big-screen tablet for work and fun.

Moving on, the tablet has dual-band Wi-Fi support, Bluetooth 5, GPS, and 4G support to allow for on-the-go voice calls.

Tablets are mostly about their big screens and the Realme Tab has a good one. It’s a big 10.4-inch IPS with a screen-to-body ratio of 82.5%. The big screen is ideal for reading books, web browsing, and video playback. Games also look good on the vibrant panel, thanks to good color reproduction and decent pixel density. Realme has used an unconventional WUXGA+ (Widescreen Ultra eXtended Graphics Array Plus) panel with 2000×1200 pixels resolution.

The multimedia experience is enhanced by a good set of quad-speakers. The Dolby Atmos-enabled speakers produce loud and clear sound allowing you to enjoy videos and games even if you don’t have headphones handy. The only downside seems to be the lack of HDR video playback support. It would have been nice to see the panel playing HDR videos on the supported OTT apps. Also, the screen is a fingerprint magnet, and keeping it clean is a task.

It is also worth mentioning that the screen’s auto-brightness feature isn’t smooth, which can be a software issue or due to a buggy ambient light sensor. The screen couldn’t brighten up on time with changing surrounding light. I often had to manually adjust the brightness levels for different lighting conditions. I guess this can be addressed easily with a future software update.

The Realme Pad comes running on the realme UI for Pad. Based on Android 11, the UI is customized for the big screens. The user interface closely resembles stock Android and has no annoying pre-installed apps or unwanted notifications. It’s a clean iteration of Realme’s mobile software and serves well for the big screen. You can run two apps at most in the split-screen mode, which is a bit underutilized for a screen this big.

The software offers the most required utilities including a dark mode, battery saver, eye comfort mode, permission manager for controlling app access to data, Google’s digital well-being features including parental controls, snappy face unlock, etc. But some good to have features aren’t offered such as Realme’s Assistive ball feature that could have come in handy on a 10.4-inch screen.

Moving on, the Realme Tablet also comes equipped with a ‘Smart Connect’ feature, which is essentially an ecosystem app allowing you to unlock the pad instantly via the Realme Band or a Realme smartwatch.

What impressed us is the ‘Kids Space’ app that offers easy access to a library of appropriate pre-loaded apps, books, and videos for kids. Kids are free to customize their app experience but you have the option to monitor their activity and user experience on the tablet. You would need a Google account to manage the space with Family Link that offers useful built-in parental control features such as screen-time management, bedtime mode, etc.

Family Link allows you to review apps to be installed on the tablet, restrict app usage, hides apps and unwanted ads for an appropriate user experience. It’s a must-have feature for a big-screen tablet that can be a good learning medium for kids in the lockdown period.

How Powerful Is The Realme Pad?

The Realme Pad is backed by the MediaTek Helio G80 SoC, which is usually seen on the budget and mid-range smartphones like the Realme Narzo 10, Vivo Y53s, Samsung Galaxy M32, etc. The octa-core SoC incorporates a pair of Cortex-A75 cores operating up to 2.0GHz and a cluster of six Cortex-A55 cores clocked at 1.8GHz to manage non-demanding tasks.

Don’t expect this tablet to always run snappy and lag-free as the hardware only suffices for most day-to-day operations. You can smoothly browse multiple Chrome tabs, stream videos on OTT apps, attend video calls, click pictures, edit pictures on Snapseed, and can even play some light games on the go. Fire multiple apps at once and try navigating the UI and you will start experiencing lags and stutters. We also experienced occasional app crashes and screen freeze issues.

While some of these issues can be addressed with OTA updates by fine-tuning the software, the hardware limitation is somewhat you have to live with. That said, the Realme Pad is mostly good for basic multitasking, light gaming, web browsing, and video streaming. Consider it as a big-screen alternative to mid-range smartphones.

Tablets aren’t usually good at photography and the same is true for the Realme Pad. Both front and rear of the tab have 8MP sensors, which are average shooters and mostly serve well for occasionally photography needs. You can capture some decent shots on a bright sunny day and attend video calls indoors provided that you have good lighting available.

Most of Realme’s well-known camera modes aren’t offered on the tablet but you do get a manual mode (only for the rear camera), composition lines, anti-flicker toggle, timer, and 1080p video recording support.

Realme has somehow squeezed a big 7,100 mAh battery cell in the 6.9mm chassis. The hefty battery lasts pretty long and is supported by an 18W fast charging. The Realme Pad can easily last for a day even with heavy usage. If you mostly use the tablet for web browsing and reading, the tablet will last you more than two days, or three in some cases.

Since the battery cell is pretty big, the 18W charger takes around three hours to refuel it from flat to 100%. Realme should have offered a slightly bigger charger and faster fast-charging support on the tablet.

To put that big battery to good use, Realme has also offered the reverse charge feature. You can use the tablet to recharge other devices such as smartphones and TWS earbuds. It’s a handy feature if you are traveling with the tablet as your multimedia device on a short weekend trip.

The Realme Pad has spiced up the usually boring mid-range tablet market in India. For its price, the first Realme tablet is a good overall package for anyone looking to buy a big-screen smart device for on-the-go media streaming, web browsing, e-Learning, attending video calls, etc. I would recommend the 64GB variant LTE + Wi-Fi variant for a better overall user experience.

iQoo 9, the anticipated upcoming handset from the Vivo sub-brand, is reportedly making its way to the market soon. The[...]

A year after unveiling a modified version of iPhone 12 for privacy-conscious users, luxury brand Caviar has now come up[...]

OnePlus has confirmed to launch a new phone with the Snapdragon 8 Gen 1 chipset. Although the Chinese company has[...]